Kinesiology is the world’s fastest growing natural therapy. It is a highly effective and versatile healing modality suitable for addressing a wide range of health care problems in people of all ages.

Discovered in the 1960’s by a group of chiropractors in the States, Kinesiology offers an wholistic approach successfully dealing with the multitude of health issues.

Kinesiology combines traditional oriental principles (similar to those used in acupuncture and shiatsu) with a modern western health discipline called muscle monitoring to assess and correct imbalances in the body.

An American Chiropractor, George Goodheart D.C., began to use muscle testing to evaluate muscle function, posture and general body imbalances. George Goodheart realized the connection between muscle (body) and meridian (physical/etheric body) – and with that the body/energy connection was made.
In the early 1970s, John Thie D.C. systemized Kinesiology for the layperson; Touch for Health. Touch for Health became a fertile ground for many different branches of kinesiology to develop from.

Muscle testing is an accurate diagnostic tool that enables the practitioner to uncover stresses in the area of nutrition, exercise, posture and emotional or spiritual blockages. A mixture of massage, acupressure and other procedures is applied to restore balance and thus ‘whole health’ by stimulation of the body’s own healing capacities.

Kinesiology is used to benefit a wide range of symptoms including: back and neck problems, scoliosis, menstrual and digestive disorders, headaches, injuries, allergies, emotional upsets and traumas.

Muscles move and hold bones in place organised and coordinated by the nervous (neural) system. As we develop, key survival programs are installed and effectively run by the subconscious part of our brain.  Disturbances of these programs due to trauma – either physical (such as an injury or accident), emotional or nutritional -can result in pain, less energy and what is generally called ‘stress’ or ‘ageing’.

Kinesiology, and specifically Neural Organisation Technique (NOT), aims to restore optimum function of the nervous system, resulting in immediate improvements in your health and overall energy levels. The common denominator: Muscle Monitoring is used to access imbalances or blockages in the communication between brain and body. 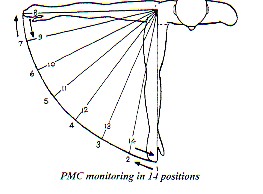 Between each muscle and the brain (cortex, spinal cord and areas of the brain responsible for movement, e.g. cerebellum) is an electrical circuit. The signaling between nerves is an electro chemical process. As we monitor a muscle we check for an intact circuit. ‘Stress’ can interrupt that circuit and block the communication between muscle and brain – the muscle will be ‘mushy’ or in kinesiology we say: the muscle unlocks.

Stresses can be of a physical structural nature – for example a whiplash injury causes the neck muscles to unlock. This can lead to stiffness and headaches. The same headache could also be caused by a chemical or nutritional stress, for example, when a person does not drink enough water and is dehydrated. Also the person could live in a situation that they experience as a ‘pain in the neck’ – we would call that an emotional stress.

The kinesiology practitioner can use Muscle Monitoring to identify the exact nature of the stress and also the modality for correction. Often appropriate lifestyle changes need to be made as well, or a deeper awareness of the situation leads to a different attitude and the symptom can be balanced.

Kinesiology is uniquely versatile and adapts to any practitioner or the needs of the client.